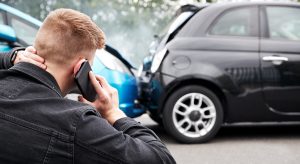 If you were injured in a rear-end collision in Florida, an experienced car accident attorney can help you to understand the legal options that may be available to you. For example, according to a news report, a crash in Perdido Key left a woman dead and two other people seriously injured after a utility truck slammed into the back of a passenger car. The accident occurred when the passenger car slowed down and the utility truck was unable to come to a safe stop. The fatality was the backseat passenger of the car. The driver and another passenger were transported to a local hospital by helicopter. The utility truck driver, who was operating the Escambia County Utility Authority truck, suffered minor injuries and was also transported to the hospital.

Following too closely. Failing to attend to the traffic ahead. Both of these terms are used to describe the cause of a type of crash that is the result of up to half of all two-vehicle crashes in the United States: the rear-end collision. According to the Florida Department of Transportation, in 2017, following too closely accounted for 14 fatal accidents in the state, and 359 accidents involving incapacitating injuries. More than 2,600 people suffered non-incapacitating injuries in this type of crash, and 8,760 other people suffered possible injuries. In more than 10,700 accidents caused by one driver following another too closely, all of the vehicle occupants were lucky enough to walk away without injury.

What Is a Rear-End Collision?

A rear-end collision is a crash that is caused when the front end of one vehicle collides with the back of the vehicle it is following. While it is generally assumed that a rear-end crash is the fault of the driver of the following car, occasionally the lead car’s driver is the one to blame. Circumstances where this would be true include:

While rear-end collisions result in a low fatality rate in comparison to other types of collisions, this type of accident can be far from minor, particularly if there is an extreme size difference between the two vehicles involved.

As with any type of accident, rear-end collisions occur for many reasons, including:

Like tailgating, speeding hampers a driver’s ability to perceive, respond to, and safely stop their vehicle when a hazard appears on the road ahead. Speeding also increases the severity of a crash, presenting a higher likelihood of serious injuries.

Distracted driving was to blame for 3,166 traffic-related fatalities in 2017 alone, according to the National Highway Traffic Safety Administration. Driver distractions fall into three categories:

Some driving distractions fall into more than one of the distraction categories. Texting, for example, causes manual, visual, and cognitive distraction, which is why officials are so concerned about texting while driving. In the estimated five seconds it takes a driver to read or reply to a text, when traveling at a speed of 55 miles per hour the driver’s vehicle will travel the length of a football field without the driver’s hands on the wheel, eyes on the road, and mind engaged in the task of driving. Besides texting, other common driver distractions include:

Driving while drowsy has similar impacts to a driver’s ability to safely operate a motor vehicle as alcohol impairment does, with reaction times, ability to sustain attention, and awareness of hazards all diminishing as a driver becomes more fatigued. Fatigued drivers are more than three times more likely to become involved in a car accident than well-rested drivers.

Driving while impaired by alcohol or drugs—including legal, illegal, prescription drugs, or over-the-counter medication—creates deficits in a driver’s cognitive function and physical reaction time needed for the safe operation of a motor vehicle. These substances impact a driver’s ability to perceive and react to hazards on the roadway, to pay attention, and to properly gauge the distance between their vehicle and the one ahead of it. This type of impairment may also cause the driver to drive recklessly or aggressively.

The maintenance of a vehicle can make or break the driver’s ability to operate that vehicle safely. Some vehicle features, if improperly maintained, can cause rear-end collisions, including failure of tires, braking systems, and brake lights. 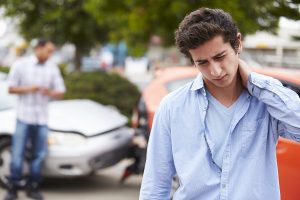 Rear-end collisions are often referred to as “whiplash crashes” due to the high number of soft-tissue neck injuries that are incurred by occupants in the lead vehicle in this type of crash. This type of injury is caused by the violent back-and-forth motion that the neck makes in reaction to being hit from behind. While this injury is typically regarded as minor and often resolves on its own, half of all whiplash sufferers report lingering pain a year after the accident took place. Other common injuries from rear-end collisions include:

Many injuries from rear-end collisions don’t necessarily present immediate symptoms, including whiplash and other soft tissue injuries, back injuries, and brain injuries. Obtain a medical evaluation after a rear-end collision even if you don’t feel hurt.

How Do You Prevent a Rear-End Crash?

It is impossible to avoid all risk of collision, as there are just too many factors that are beyond a single driver’s control. However, there are some tips that you can use to avoid many of the situations that lead to rear-end collisions, including:

I Was Injured. What Should I Do?

If you’ve been injured in a rear-end collision in Florida, there are several things you need to do as quickly as possible: