WHAT IS THE AVERAGE SETTLEMENT FOR A CAR ACCIDENT NECK AND BACK INJURY? 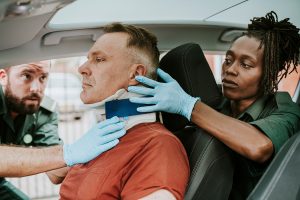 As a car accident lawyer, I often have people ask me what a certain type of case is worth. It makes sense for people to ask that question. Personal injury law, in a rough sense, ultimately boils down to putting a dollar value on an injured person’s pain, suffering, and financial losses. The people asking this question expect there is a simple answer to their question. A lot of the time, it surprises them to hear me say that there is no simple answer.

The title of this blog post asks “what is the average settlement for a car accident neck and back injury?” Below, I walk you through how I try to answer that question in each individual case. But if you want the short answer to the question: There is no average settlement for car accident injuries. Every case is different. And it takes working with an experienced auto accident attorney to pin down the amount of money you can and should seek if you get injured in a car accident caused by someone else’s negligence.

What Is a Settlement?

Before I dive in, I want to take a step back and explain what I mean by “settlement.”

A settlement is any agreement to resolve a legal claim, whether or not a lawsuit has been filed in court. In cases dealing with car accident injuries, a settlement usually consists of an insurance company paying money to the injured person, in exchange for the injured person agreeing not to pursue the claim any further.

A settlement is one of two general ways a legal claim can end with the injured person receiving money. The other is an award (usually delivered by a jury at the end of a court case). What’s the difference? For the injured car accident victim, not that much—they’re both ways to receive money damages that pay for injuries and losses. But legally they are very different. A settlement is basically a contract to end a case without letting a jury decide it. A jury award (or verdict) is the judgment of a jury about who wins and who loses.

All of that being, for the sake of simplicity, here I’m going to use the word settlement to mean money your recover for an accident, whether it’s through an agreement with an insurance company or because of a jury award.

Under general principles of Florida law, if someone hurts you through their wrongful conduct, you have the right in most circumstances to take legal action against them for money damages. That rule applies to car accidents, but with one limitation.

In Florida, all drivers have to carry no fault auto insurance. One component of this type of insurance is known as personal injury protection (PIP). PIP covers the driver and their passengers for medical costs associated with their own injuries in a car accident, no matter whose fault the accident was, up to a certain limit. PIP also covers a portion of those peoples’ lost wages if they have to miss work because of their car accident injuries.

So, a Florida driver who sustains a neck or back injury in a car accident that was 100 percent the other driver’s fault still has to seek benefits first from their own PIP insurance, not the other driver’s insurance. Under Florida law, you can only seek damages from the at-fault driver if you sustained certain types of serious injuries and if the cost of those injuries exceeds your PIP insurance limits.

So, for example, if you suffer minor whiplash in a car accident that costs less to treat than your PIP coverage limits, then you likely cannot seek damages for your injuries from the at-fault driver. On the other hand, if a car accident leaves you with a traumatic spinal-cord injury that paralyzes you and will likely cost millions of dollars over your lifetime to treat, then you probably can take legal action against the other driver for damages.

What Damages Go Into a Car Accident Settlement?

So, let’s assume you get into a Florida car accident where the other driver is 100 percent at fault, and you sustain serious, life-altering neck and back injuries that will likely cause you permanent disability. In this sort of case, Florida law allows you to take legal action against the other driver for damages. What can those damages include?

Economic damages cover your out-of-pocket costs directly associated with your car accident-related neck and back injury. These typically include:

Think of economic damages as anything you can show a receipt or pay stub for that you wouldn’t have had to pay (or would have earned) if you hadn’t gotten injured.

Non-economic damages pay you for the general harm an injury causes you, such as:

Think of non-economic damages as paying for what the accident and your injuries took from you that doesn’t come with a receipt.

On rare occasions, a settlement might also include so-called punitive (or exemplary) damages. These are damages that punish the person who harmed you and aim to set an example for others.

How Does a Settlement Get Calculated?

Now that you know what categories of damages go into a settlement: economic, non-economic, and (in rare cases) punitive. But how do those amounts get calculated? It will probably not come as a surprise to hear that it depends.

Some of the calculation of economic damages is pretty easy. It just requires tallying up the bills you have received for medical care, services, and so on, that directly result from your car accident injury, as well as what you would have earned at your normal rate of pay for the pay periods you missed at work. Simple enough.

But economic damages also look into the future, and that’s where they can get tricky. Oftentimes, car accident lawyers will turn to financial, medical, and life-planning experts to help them calculate what a car accident victim’s future costs for medical care, treatment, and services will be, as well as what the victim would have earned in the future if not for the car accident.

The goal in calculating economic damages, at the end of the day, is to come up with a number that covers all past and future hard costs associated with an injury.

I really shouldn’t use the word calculating when talking about non-economic damages. Determining what someone’s pain, loss of life enjoyment, damaged relationships, and mental health are worth has little to do with adding up numbers. It is what lawyers call a subjective determination. And what it comes down to is what a jury of citizens, exercising their reasonable judgment and common sense, think is a fair amount of money to compensate a car accident victim for their suffering.

This number can vary, as you might imagine. To begin with, trying to translate pain into dollars involves a significant amount of guesswork and gut instinct. Juries often take the nature and severity of the injury, the type of disability it caused, and a person’s age, health, type of employment, family situation, and future prospects into account in determining a fair number.

Let me pause here and say that most car accident cases never end up in a trial decided by a jury. Instead, the vast majority end in a settlement between the car accident victim and (usually) an insurance company. But even though there is no jury deciding non-economic damages in settlement discussions, lawyers and insurance adjusters use their own sense of what a jury might do if the case did go to trial to come up with a fair amount of non-economic damages.

In the rare case in which it is appropriate to include punitive damages in a settlement, the analysis is roughly similar to what happens in cases of non-economic damages. A jury must determine what is a fair amount of money to punish the wrongdoer and set an example for others. Florida law, however, puts caps on certain types of punitive damages. An experienced lawyer can explain how those limitations work.

With so much gray area in how the damages that go into a settlement are calculated, is there any way to give yourself the best chance of getting the highest settlement possible after a motor vehicle crash resulting in a neck or back injury?

The answer is: “Yes. You can hire an experienced Florida car accident lawyer who is familiar with neck and back injuries.” Here’s how finding the right lawyer makes the difference between getting a so-so settlement versus the largest settlement you deserve.

A skilled car accident lawyer knows how to dig deep into the costs associated with your particular injury. It is easy to collect bills and add them up. But the trick is knowing what costs are likely to arise in the future, so that you do not get stiffed for unexpected costs associated with your injury five or ten years down the road. That knowledge comes from having experience helping clients who have suffered neck and back injuries in car accidents, and creativity in assessing potential future costs.

Exploring The Impact Of An Injury

When it comes to non-economic and (less commonly) punitive damages, an experienced car accident lawyer’s job is to explore how an injury has affected a client’s life. It takes a lawyer with empathy and the ability to listen to do this job well. Lawyers who spend time with their clients and learn about their hopes and priorities can distill and explain the profound impact car accident injuries have had on their clients’ lives.

Negotiating From A Position Of Strength

After doing the legwork to estimate the damages the client has suffered, an experienced car accident attorney should then have the skill and creativity to use that estimate to negotiate for the maximum possible settlement. Maybe the most important element of this negotiation is that it be conducted from a position of strength. It’s one thing to say, “If you don’t offer a fair settlement, then I will take this case to trial and most likely win.” It’s another thing to have a track record to back that up.

Insurance companies and opposing lawyers make the best settlement offers when they truly believe they’ve been outworked in terms of preparation, and that they will be outmatched in the courtroom.

What Is Your Neck and Back Injury Settlement Worth? Ask a Car Accident Lawyer.

As I said at the beginning of this blog post, there is no single answer to the question, “What is the average settlement for a car accident neck and back injury?” Settlements vary based on the severity of the injury and the expected outcome, the injured person’s personal characteristics, and the skill and reputation of the injured person’s attorney. The best way to get the most money for a car accident neck and back injury is to seek out an experienced Florida car accident attorney. The sooner you do so, the better your chances of recovering the compensation you deserve.

If you have questions about your rights after a Florida car accident leaves you struggling with a neck and back injury, contact an experienced auto accident attorney today.