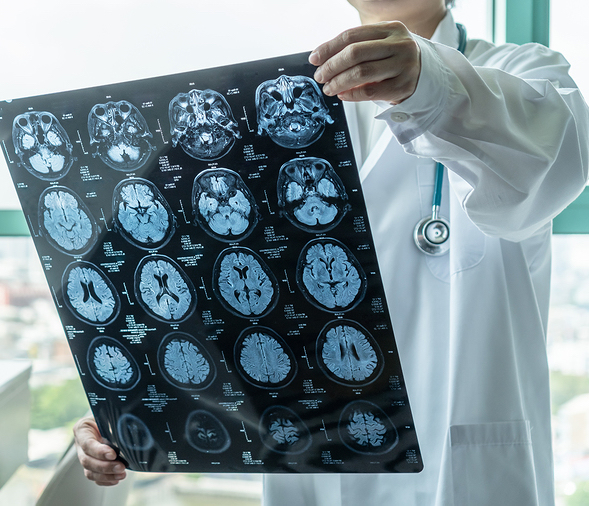 No matter how traumatic brain injuries occur, they can prevent victims from returning to work and cause significant impacts on victims’ lives.

If you or your loved one suffered a brain injury as the result of someone else’s negligence, recklessness, or intentional act, you may be entitled to compensation.

Victims may file a personal injury claim, which is a legal process through which victims may seek damages from responsible parties.

The compassionate Orlando brain injury lawyers at The Law Office of Jerry Jenkins know what you’re going through because we’ve helped many people just like you.

Call us now to see how we can help you.

What Is a Brain Injury?

A traumatic brain injury (TBI) is a disruption in brain functioning that is caused by an external force, such as a forceful blow or bump to the head. The brain is made up of several sections, known as lobes, which control nearly every part of your body by relaying signals through the spinal cord. The impacts that a brain-injured individual may incur as a result of their injury vary widely.

The impacts depend not only on the severity of the injury, but also the lobe in which the injury occurred. In addition, the side of the brain that was injured can determine the extent of the injury’s impact.

Below we look at the different lobes and sides of the brain, the functions they control, and the possible effects of injuries.

Brain injuries frequently cause complications, both immediately after the injury takes place, as well as additional complications months and years later.

Some of the common complications include:

A police officer who was shot in the head during an on-duty incident was recently awarded a full disability pension from the Orlando Police Department. The pension provided will compensate him and his family for the rest of his life. The Pension Board determined the officer was eligible for a lifelong pension within mere minutes.

The officer suffered his injuries after responding to an incident involving a man holding a woman and her four children hostage. As the officer kicked open the door of the apartment, where the hostages were located, the suspect shot through the door, striking him in the head. The officer’s wife now serves as his guardian, as he is unable to communicate. As a result of his injuries, he is permanently and totally disabled.

Many traumatic brain injuries do not occur in the line of duty and, as such, are not eligible for disability pensions. That’s where a brain injury lawyer can help.

Many other things cause traumatic brain injuries, of course, and they happen all the time. TBIs are a major source of death and disability in the United States. Around 155 people die each day from injuries that involve damage to the brain. Brain injuries result in around 2.87 million emergency room visits each year.

Some of the most common causes of this type of injury include:

The Impacts of Brain Injuries on Daily Life

The lifetime costs of medical treatment for a person suffering a traumatic brain injury are estimated to be between $85,000 to $3 million. Compounding this hardship is the fact that many individuals with brain injuries can’t return to work in the same capacity or to return to work at all.

The unemployment rate for brain injury victims two years after the injury is significant, estimated to be around 60 percent. Studies show that more than half of the homeless population in the United States have suffered some type of brain injury. It is safe to say that brain injuries impact every part of a victim’s life. Below we discuss some of those impacts.

For family members, the initial excitement of having their loved one home again after a stay in the hospital will likely be tempered by the new realities of daily life. After suffering a traumatic brain injury, victims frequently require extensive daily care.

Spouses and children often find that the relationship they had with their loved one transforms into a caregiver/patient relationship. Families likely must assume caregiver responsibilities, including assisting the injured person with daily tasks such as bathing, dressing, using the toilet, and eating. The family often suffers from a change in their routine and activities as their loved one can no longer care for themselves. Family members of victims often state they feel isolated from their friends, and lack empathetic support.

Brain injuries can not only change the personality of the individual who has been injured, but also change his or her sexuality as well. Victims often suffer from a lack of sexual desire, the inability to perform sexually, or an altered sense of body image. Hormonal changes that typically affect victims of traumatic brain injury can drastically change their sexuality. In some cases, victims may engage in inappropriate sexual behavior or undergo a change in sexual preference.

While many people cannot return to any sort of employment after suffering a traumatic brain injury, others may perform some sort of work, but not the type of work they were tasked with before their injury. Of those who can return to the job they held before the injury, many require modified work schedules.

Workplace modification may include longer or more frequent breaks, as fatigue is a common complication from brain injuries. Additionally, brain injury sufferers may also require a lighter workload during the hours that they can work.

Contrary to popular belief, children do not have a greater chance of recovery from brain injuries than adults. Instead, the severity of the deficits suffered by children may not be completely known or understood for many years. The impacts may only become apparent as the child continues to grow and develop.

Children who have suffered brain injuries often require assistance at school. Educational assistance may include hiring a paraprofessional who can help the child stay organized and provide assistance to the child in completing expected tasks. Also, children with TBIs often require extra time to complete tasks, oral examinations instead of written ones, and audio or video recordings of instruction.

The friends of an individual suffering a brain injury often find that they have little in common with the person afterward. Due to the extreme changes that a brain injury can cause to someone’s personality, many who knew the individual before cannot interact with them in the same manner as before.

Sometimes a brain injury victim can no longer participate in activities that they enjoyed with friends and loved ones. Injured victims may also exhibit a loss of emotional control that is marked by angry outbursts or inappropriate behavior. The injured person often struggles to communicate, making it hard for the relationships to continue.

Fighting for the Rights of the Injured

Victims of traumatic brain injury often face a long road to recovery and may never be the person they were before the accident. Because the brain has little ability to heal itself, many of the deficits a person suffers shortly after the injury takes place will remain permanently. If you or your loved one have suffered a brain injury due to the actions of someone else, you may be entitled to compensation.

The experienced team at Law Offices of Jerry Jenkins can help you understand the legal options for pursuing compensation that you have available to you.

“Jerry was swift, he directed me and gave me good advice, hooked me up with great medical teams and followed my wishes for financial negotiation. Jerry has a wealth of knowledge and used all capacities to get the most I can get from my claim. Jerry will return your call in a timely manner, he will handle you correctly and accordingly. Don’t go nowhere else.”