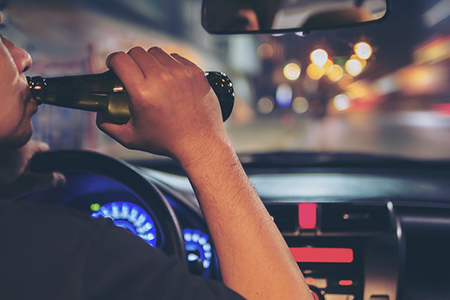 When most people think of drunk driving, they think of alcohol. However, people who are under the influence of certain types of drugs and/or chemical substances are also subject to drunk driving laws. Even those taking prescription medications can be charged for driving under the influence (DUI) if they are not supposed to be driving after taking those medications—yes, even if those medications are prescribed by a doctor.

Furthermore, if a driver is caught with a prescription drug but does not have their prescription, not only can they be charged with driving under the influence if they have recently taken the drug, but they can also be charged with unlawful possession. They might avoid the second charge if the prescription is in its properly labeled container with their name on it.

If you were in an accident with someone who was under the influence of alcohol or drugs, contact an auto accident attorney like the team at the Law Offices of Jerry Jenkins.

In addition to beer, wine, hard liquor, and illicit drugs, certain chemical substances are illegal to consume. Possessing, breathing in, inhaling, or drinking these chemicals is illegal and can lead to a DUI charge if a person is caught driving under the influence of these chemicals. These substances include:

DUI cases are heard in traffic court and the penalties are harsh, especially for DUI manslaughter. Criminal penalties can range from a misdemeanor to a felony. DUI manslaughter comes with a felony charge. Additionally, repeat offenders get increasingly higher fines and longer jail time.

An injured victim or a deceased victim’s family members may also sue the perpetrator in civil court even if the DUI case also went to traffic court. Not only will the perpetrator have to pay the appropriate fines to the traffic court and do possible jail time, but they may also be required by the civil court to pay the victim or their family if the victim’s insurance company doesn’t cover the full cost of their injuries and damages.

Other penalties may include:

If a person is convicted of DUI manslaughter, they will have their license revoked. Additionally, the drunk driver faces punishment for a second-degree felony for DUI manslaughter. If the drunk driver does not render aid at the crash scene or fails to give information to the police, they may face punishment for a first-degree felony. These charges are in addition to the damages the defendant may be required to pay as a result of claims brought through a personal injury lawsuit in civil court.

The severity of these criminal punishments may get a drunk driver off the road, but don’t do much to help their victims, who are struggling with serious injuries through no fault of their own. That’s where a drunk driving accident attorney can help you pay for the medical, psychological, and other treatments you need to fully recover.

Injuries Suffered in a DUI Crash

If you are injured in a crash with a drunk driver, your injuries may be minor or catastrophic, depending on the speed you and the drunk driver were traveling. How the driver hits you, whether from behind, head-on, or the side, also has an impact on the severity of your injuries. Injuries may include:

Time Is of the Essence

Even if you are still in the hospital because of your injuries, contact a DUI accident lawyer as soon as possible. You have a limited amount of time to file a case. Once the statute of limitations runs out, you will not be able to collect from the insurance company nor take your case to trial. The attorney will always try to settle the case first, so you do not have to go to trial. However, should you have to go to trial to get the compensation you deserve, the attorney will need to file your case before the deadline.

Keep in mind that it takes time to investigate a case, which includes proving fault and negligence in the accident and working with medical professionals who can testify on your behalf about your long-term or permanent injuries.

Because Florida is a no-fault state, your own insurance company will pay for damages up to the amount your policy covers. If your insurance policy limits are not high enough to cover your injuries or other damages you may be entitled to, the drunk driver’s insurance policy and the driver themselves may be required to cover the remainder of your expenses.

Why You Shouldn’t Settle With Your Insurance Company by Yourself

Insurance companies are in business to make a profit. Your best interest means that the insurance company’s bottom line suffers, and they will offer you the lowest amount possible to make you go away. However, a DUI accident lawyer will review your medical expenses and take into account other damages you could be entitled to and will try to come to a reasonable settlement with the insurance company. If the company refuses to come to a fair settlement, your attorney will take the case to court.

Damages settled for or awarded in a DUI wreck can include special damages, general damages, and punitive damages. Each category encompasses several types of damages.

These are often referred to as economic damages as they have a dollar amount attached to them. Special damages may include:

In some cases, future medical expenses and future lost wages may be categorized as general damages. While they do have a cost associated with them, that cost is unknown at the time of settlement or at trial. Insurance companies and attorneys estimate the cost based on the average time certain types of injuries take to heal.

Because you might be entitled to future lost wages and future medical expenses, let your attorney know if you have underlying issues that might cause your injury to take longer to heal. Diabetes, a compromised immune system from cancer or other diseases, and certain medications, such as chemotherapy, can cause injuries, especially open wounds, to heal more slowly. Those with compromised immune systems also have a higher risk of having an open wound become infected, which also adds to the time and cost of recovery.

General damages are often referred to as non-economic damages because a price tag cannot easily be attached to them. A general damage award depends on each injured person’s situation, but can include:

Generally, injuries are considered long term if the effects are expected to last at least a year.

This type of damage is only awarded as a punishment for the defendant. The defendant’s behavior must have been grossly negligent or intentional. In many cases, punitive damages are awarded in a DUI accident because the defendant knew that they should not have been driving under the influence and that their actions had a high probability of getting someone injured or killed.

If you were injured or you lost a loved one in a DUI crash, contact the Law Offices of Jerry Jenkins at (407) 287-6757 for a free case evaluation and to learn more about your rights and the damages you might be entitled to.

“Jerry jenkins is the best Attorney he was a very powerful advocate for me through out my case I highly recommend him to anyone who is in a bad situation. Thank you alot Jerry I wish you nothing but the best”