The size, weight, and center of gravity of trucks make them more likely to roll over than other vehicles. Truckers have the protection of a large vehicle, so they often walk away following traffic collisions. Rollovers are a different story. Not only do truck drivers face a severe risk of injury and fatality, so do any other drivers or passengers in the vicinity of a rollover. We offer this guide about truck rollovers to help you avoid severe injury or death if you are near a truck when it rolls. Keep reading to learn about the physics behind truck rollovers, common scenarios that lead to rollover accidents, and injuries you might suffer if you are involved in a truck rollover accident.

The Physics of Truck Rollover Accidents

A truck rollover accident is a specific kind of traffic collision that occurs under particular conditions related to the stability of a truck when it turns or goes around a curve. A truck’s stability hinges on its center of gravity and the size of its track width, which is the distance between the right wheels and the left wheels of the vehicle.

If you consider an empty tractor-trailer, it’s one of the tallest vehicles on the road. As the load of a truck increases, its center of gravity also moves higher. The gravitational force of traveling around a curve or corner too quickly pulls the weight in the trailer away from its center of gravity. This creates instability, which sometimes is visible to other drivers. Quick maneuvers can cause a force strong enough for a truck to skid and rollover. If you notice a trucker traveling too fast for inclement weather, traffic, or road conditions, it’s in your best interest to avoid going near the truck if you want to avoid involvement in a rollover collision.

Why Do Truck Rollovers Occur?

Over the decades, the Federal Motor Carrier Safety Administration (FMCSA) has dedicated ample resources and time to learn what things cause truck rollers. A deeper understanding of these dangerous events helps the FMCSA teach truck drivers and the public how to avoid and prevent truck rollovers.

A landmark study about rollover accidents reveals that the immediate cause of a rollover is “something that increases the roll moment about the longitudinal axis of the vehicle, generally either turning too quickly or allowing one side of the vehicle to drop or rise suddenly.”

The researchers, who took a closer look at a previous FMCSA study, found that driver error is the primary cause of truck rollovers. Sometimes another motorist or the condition of a tractor-trailer can also cause a rollover collision. The study outlines seven broad causes for truck rollovers:

The researchers from the previously mentioned study examined 239 roller crashes and found that speed impacted at least 35 percent of the accidents. Speed-related causes of truck rollovers are:

According to the study mentioned above, inattentive driving is the second leading cause of truck rollovers. Inattentive driving is most common and dangerous when drivers lose focus on the front of their truck. If a driver needs to make a quick turn, the sudden maneuver can lead to a rollover accident. Fatigued truck drivers who don’t pay attention or nod off while operating their trucks can also cause rollovers as well as drivers plagued by other distractions such as cell phones, passengers, CB radios, eating and drinking, and more.

Truck drivers who struggle to control their rigs can cause severe, sometimes fatal rollovers. Loss of control can occur because of weather or a road hazard, but driver inexperience can also lead to a rollover.

The previously mentioned study reports several maneuvers that lead to rollovers. They include:

Failure To Scan The Road

Researchers in the above study attributes some rollovers, especially those among small trucks, to inadequate visual searching. It’s likely large trucks don’t struggle with this because the vast majority of rollovers occur on interstates and major highways and points of conflict with other vehicles are low. On the other hand, smaller trucks who travel in the city need to scan the road ahead of them to evaluate intersections and make decisions about changing lanes.

Poor trip preparation, which is referred to as pre-operation conditions in the above study, can also cause truck rollover accidents. These causes include things conditions that existed before the driver ever got behind the wheel. Some specific examples of poor trip preparation include improper cargo securement and truckers who aren’t in the proper state to drive. Rollovers can occur when the driver has an illness or disease. Their state or the medication they take to control their condition can lead to a truck rollover. Some examples include falling asleep while driving, heart attacks, and strokes.

Truck drivers have very little control over maintenance and loading issues that lead to accidents. Trucking companies have the legal obligation to put roadworthy trucks on the road. Old tires that need to be changed or rotated can blow out and cause a rollover. Semi-trucks have 18-wheels, so one blowout might not be catastrophic.

Yet, under the right circumstances, even one tire blowout can cause a driver to lose control and result in a rollover. Loading also leads to rollovers, especially if truckers get assigned a load and don’t know how the cargo weight has been distributed in their trailer. Some configurations can change the center of gravity and make a truck more unstable, creating conditions for a truck rollover collision. 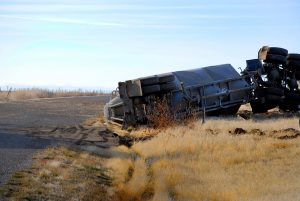 Many truck rollover accidents don’t impact other drivers on the road. Yet, when a rollover involves other vehicles, injuries are severe and accident victims have a higher likelihood of death than in other types of traffic collisions. Even smaller trucks like dump trucks, garbage trucks, and cement trucks weigh much more than the average passenger vehicle. This weight increases the force of impact during a rollover that can cause unimaginable damage to another vehicle. Similarly, if you are driving and a truck rolls over nearby, you face debilitating injuries if you cannot avoid striking the truck. Some injuries truck rollover victims can experience include:

Suffering a neck injury is commonplace in most severe traffic collisions, but those involved in truck rollover crashes are especially vulnerable. The impact of the collision causes a person’s neck to rapidly extend and flex causing damage to soft tissue in the neck area. Victims can suffer from ongoing neck and shoulder pain and headaches. In the worst cases, victims might also suffer bulged discs or fractures that require surgery.

Bodies move in many different unnatural ways during a traffic accident, especially one that involves a truck. These can result in severe back injuries like fractured vertebrae, slipped discs, and herniated discs.

Accident victims can sometimes get relief from corrective back surgery, but often still suffer some level of chronic pain for the rest of their life. Pain management is a part of coping with a severe back injury and can include relying on highly addictive prescription medication, cortisone shots, or special surgical implants, none of which are pleasant. Even with a strict pain management regimen, some back injury victims remain in constant discomfort whether they sit, stand, or lie in bed.

Spinal cord injuries are a special kind of back injury whose catastrophic nature gives them a place of their own. Pieces of fractured vertebrae can get lodged in the cord and cause permanent damage, and spinal cord cells do not regenerate like some other types of body cells. A spinal cord injury is among the most costly and most severe injuries a person can experience. Victims typically suffer some type of loss of body function.

The extent of the loss depends on the severity and location of the injury. Spinal cord injuries that occur close to the brain effectively cut off communication with the rest of the central nervous system and can result in permanent full-body paralysis, known as tetraplegia. Injuries that occur closer to the tailbone don’t cause as much loss. Spinal cord injuries in the middle of the back have varied consequences. Functional loss might be temporary and victims might regain function when swelling associated with the injury dissipates. Yet, many spinal cord injuries cause permanent damage.

Truck rollover accidents create the conditions where a driver can easily get his or her legs, and sometimes arms, pinned in their vehicle. If a semi rolls over onto another vehicle, it will likely crush the vehicle, putting drivers and occupants at risk for crushed limbs depending on where they are seated in the vehicle. A crushed limb isn’t receiving blood from the rest of the body, so it starts to die. In some cases, doctors can restore blood flow and save the limb. In other cases, doctors must amputate to save the accident victim’s life.

Amputees must let their stumps heal, but can still experience pain for months or weeks past the procedure. Some amputees also suffer from phantom limb pain where their limb used to be. Losing a limb is also a major emotionally traumatic life event and many amputees need ongoing therapy to cope with their loss.

Some trucks carry hazardous material that is highly flammable and explosive, such as gasoline. If a fire or explosion occurs during a truck rollover accident, those who are nearby risk burn injuries. Burn victims sometimes need one or more reconstructive surgeries and skin grafts, plus months of time for healing a recovery. Even after multiple surgeries, burn victims can suffer permanent scarring from their injury, causing additional emotional trauma on top of an excruciatingly painful injury and recovery.

If you were in a truck rollover accident as a result of a negligent truck driver, a skilled truck accident attorney can help guide you through the claims process and obtain the compensation you deserve for your injuries.